Prime Minister Narendra Modi turns 69 today and he plans to start his birthday with an early visit to his mother Heeraben, who lives near Gandhinagar in Gujarat. The Prime Minister is expected to meet his mother around 6 am, after an overnight stay at the Gandhinagar Rajbhavan. Heeraben, 98, lives in Raisin village with her younger son Pankaj Modi. 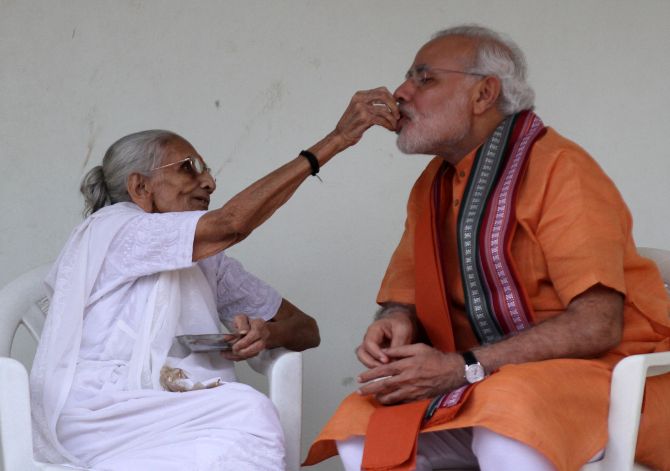 After meeting with her, PM Modi will fly from Gandhinagar to Kevadia in Narmada district to review programmes and projects including the Statue of Unity and the Sardar Sarovar Dam on the river Narmada.

On being elected for the second time with a record break elections….we are glad to discuss with you some of the remarkable highlights of Mr. Modi since 2015till now…. his vision for a better India…

Prime Minister Narendra Modi led his Bharatiya Janata Party (BJP) to a super-sized victory for a second term in office. With the General Elections 2019 establishing Modi as the most popular leader in decades, BJP not only surpassed its 2014 performance but also crossed 300-seat mark in the 543-member Lok Sabha elections in 2019. Narendra Modi was first elected as the 14th Prime Minister of India in 2014 after leading the BJP party to a massive win in the Lok Sabha election

At the age of eight, he was introduced to the Rashtriya Swayamsevak Sangh(RSS) and ever since he became an active member of the party. Narendra Modi became a full-time RSS worker in 1971 and the party assigned him to the BJP in 1985, where he held numerous positions within the party until 2001.

In August 2012, Narendra Modi achieved a unique feat when he became the first Indian politician to interact with netizens via live video chat

He has also been declared a fashion-icon for his signature half-sleeved, crisply ironed, kurta as well as for a suit with his name repeatedly embroidered in the pinstripes that he wore during a state visit by Barack Obama, former US President

On November 9, 2016, Narendra Modi’s government demonetised banknotes, with the intention of curbing black money, corruption, the use of counterfeit currency, and terrorism.

Narendra Modi has also conferred the Seoul Peace Prize 2018 in recognition of his dedication to improving raising global economic growth, international cooperation, accelerating the Human Development of the people of India by fostering economic growth through social integration efforts and anti-corruption making him the first Indian to win the award. He received the first Philip Kotler Presidential Award in 2019.

Narendra Modi has also conferred the Seoul Peace Prize 2018 in recognition of his dedication to improving raising global economic growth, international cooperation, accelerating the Human Development of the people of India by fostering economic growth through social integration efforts and anti-corruption making him the first Indian to win the award. He received the first Philip Kotler Presidential Award in 2019.

Narendra Modi’s powerful ‘personal connect’ with the people on the ground is complemented by a strong online presence. He is known as India’s most techno-savvy leader, using the web to reach people and bring about change in their lives

Narendra Modi shared this rare picture on Instagram captioning it as, ‘ I thank Portugal PM Antonio Costa for this gift, the Portugal football team’s jersey autographed by Cristiano Ronaldo. Sport is an area that holds great promise as far as India-Portugal ties are concerned.’ Beyond politics, Narendra Modi enjoys writing. He has authored several books, including poetry. Narendra Modi begins his day with yoga, which centers his body and mind and instills the power of calmness in his otherwise fast-paced routine.

Some of the Interesting Facts about Cricket...